Michael has an impressive CV as an entertainer. He has spent the last 17 years touring Canada

and the USA as a ‘Master Escape Artist’ and “Illusionist”.  He has the World Record for being

‘The Houdini Water Escape’ which he performed when he was only 17 years old.  He is also

a psychic artist who can paint people’s energies and claims to be Canada’s Leading ​Paramentalist,

that is, he can read your mind to a fair degree of accuracy and he utilizes paranormal abilities in his

performance art.  Surely it’s all a trick?” Presumptions aside, if you meet M. Telstarr and he proceeds

to tell you what you’re thinking, it is hard not to be impressed, if not a little disturbed.

Beer Up With Michael

I first meet him in Nevada at after his first show. The show was very entertaining and a little oppressive. He would find people in the audience he could connect with mentally, and then proceed to tell them all manner of things about themselves, from what underwear they were wearing to what people they knew and what aspirations that they ​had. He could pick a random person and ask them to focus mentally upon an image.  ​He would then close his eyes for a second, concentrate and then draw the image of the chosen person’s thoughts on a canvas.  He was never wrong. I talked with him for a while and we eventually decided to share a few beers at his hotel room and discuss his mental abilities. ​I remained a little skeptical and believed it all to lie somewhere within the realm of illusion or hypnosis.  He admitted to a small degree that it was an illusion, and he said about 10% and the rest was as real as reality stretches. Of course, the proof is in the pudding and I began to suggest that I test his ability. He agreed and gave me a scrap of paper. He asked me to write down the name of my Mother, Father, and girlfriend, my favourite colour of underwear on a woman, what I had for breakfast and draw a shape of my choosing. I agreed.

I scribbled down the answers. “Every person can develop psychic ability.  There is an energy that

permeates around them when they manifest their ability.  The psychic ability often derives from the

dream state.” Your Father’s name is Bob? He asked.  My Father is called Robert, so yes. My Mother’s

name, Joan, yes…Soon he had answered all the questions correctly and drew an almost identical

sketch to mine!  My mind became suddenly defensive and every terrible thought I could muster

sprang loudly from hidden corners of my brain.

He seemed to see my defenses rise but continued with his show of mental ability. He placed his hands

levitate before my eyes. I was stunned and inspected the hovering beer can for signs of strings etc.

There was nothing around it. Gulp!

Time to get out of here!  I thought loudly and before I could make

my excuses, Michael suggests we call it a night.

The levitation played on my thoughts.  In his show, he levitated a dollar bill, which was mind-boggling enough, but beer can half full of beer! He claims that he can sometimes levitate people! As an increasingly more popular performer, he now gets banned from casinos purely for his ability for getting it right.  He does private readings and also ‘remote view’ and ‘astral project’.  He’ll even teach other people how to do it. Levitated a beer can before ​Richard’s eyes in an informal situation.  Shadowing all his abilities and paranormal stories is a claim that is really quite startling. He says, through his psychic ability he has contacted alien life. Let him tell you in his own words. Beyond Dreams Interview with Michael Telstarr “Every person can develop psychic ability.  There is an energy that permeates around them when they manifest their ability." The psychic ability often derives from the dream state.  You begin to focus the energy by actively trying to recall your dreams. When you have mastered good dream recall you can ​begin to try to control your dreams.  This first happened to me when I was 14 years old.  It is called Lucid Dreaming, where you can manipulate your dream world very consciously. It gets to a stage when cannot tell the difference between reality and dreams. After this, I had dreams where I was waking up in the dreams and ​I thought I was still dreaming. Sometimes, I couldn’t tell the difference between dream state and consciousness. This lasted for a couple of years. The next state-stage began when I had unconscious projections.  I would leave my body and explore. Eventually, though this manner of projection, I would leave my body and explore. Through this manner of projection, I made contact with extraterrestrials.

​By this time I began to think I was going mad.  I began doubting myself seriously.  My father took me to see some doctors at an *institute when I was 15 years old.  They said I was fine after several hours of probing and questioning.  There was a child specialist and adolescent specialist and another doctor.  They wanted to just know why my father took me in.  They asked me all these questions and

I told them the truth up to a point.  I was careful not to go into what was happening. I had to keep that out.  Who would believe it? After the session, they actually asked for my father to come back instead. My father got really mad. *(My father was told after the testing that I was OK but they asked him to come back in the next day to ask why he thought there was something wrong with me. My Dad cursed at them saying, "he has tricked all of you and my son must be smarter than the doctors because he's fooled them all). I felt really bad about it even though it’s kind of funny.” ​

a psychic encounter, it can happen. It is usually the case however that people will ask

they don’t really want something to happen. I was told this by two other beings when

I later projected. They were human and they could have been extraterrestrials or an

advanced human species, some off-shoot of humanity.  I don’t want to label them because

I really don’t know the answers regarding who they were. When the conscious and the

sub- conscious decision to make contact are harmonized then it is more likely to happen.

It took me about ten years to get rid of the fears that I had.  I had projections where

I’d come out of my body, see the beings and then dive right back into my body in sheer terror.

I became terrified to project – I thought I would die. However, I knew that I was not going crazy,

back in 1990 and did some work with them that helped me understand ​ a lot. I met a guy who had the same experience as me and

I could relate to him.  There is this line which represents fear we all live on one side of it and if we can cross that line we can experience the other side.  Most people get close but fear stops them from getting anywhere.  Some people stop on the line and the longer they stay there the more terror they experience.  They have to take a leap.  When they cross the line and come to terms with the new experience, the fear dissipates. You can rationalize it and be aware that it shouldn’t bother you.  You`ve got to say, and mean, I`m going to project and stay out. "Saying that I have had entities chasing me when I projected. There would be two or three of them and they would all be ten foot high!`` I`d fly back into my body and they`d be right behind me, chasing. I remember feeling the sensation of looking behind me and seeing them coming at me.  Where ever I ran, they`d be right there with me.``The Umbilical From Within." There is a myth that if you go too far away from your body, you can die but you cannot die. It’s unlimited.  The connection between you and the projected body is indestructible, it`s pure energy. You can see the connection but I’ve only seen it once.  It’s like a large band. About six inches in diameter and it goes from the tip of your head to the spine of your back.  It starts here in a large area and goes into a six-inch tube which stretches into infinity, so it looks really thin and stretched a long way but it cannot break unless the physical body dies first.  It looks kind of disgusting.  The body knows what is happening when you are out there, it`s aware. If a phone rings, you will hear it from the outside and you’ll perceive it from your projected state. Sometimes a noise can drag you back.  At first, a lot of noises would bother me and wake me up.  Eventually, you can train yourself to ignore these types of stimuli.   The state where you will stay out is called THETA. It is a brief state in between sleep and consciousness that will take practice to sustain. I have developed sensitivities while in this state. ``Energy is Life``. You begin to know what energy is.  Everything is related to energy.  People, circumstances, everything is energy.  Once you understand it, you will be whole and understand all things. ``There is this line which represents fear.  We all live on one side of it and if we cross that line we can experience the other side.

*This was not mentioned in the original interview. 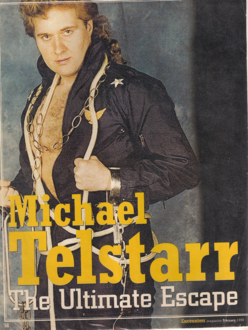 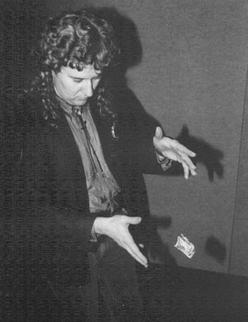 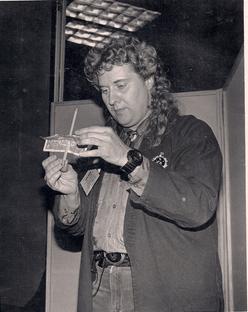 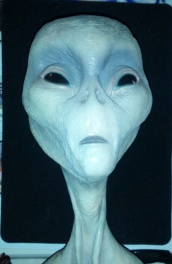